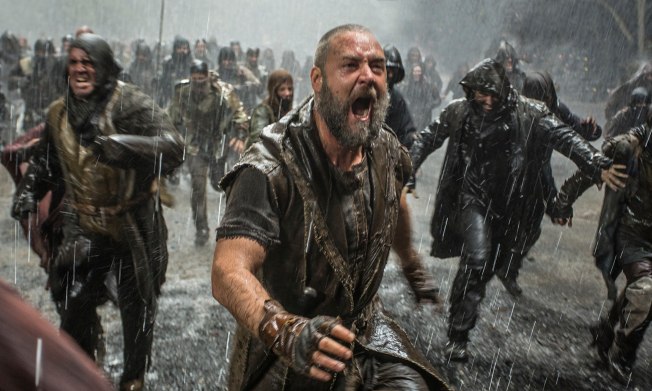 Let me praise Aronofsky’s Noah for its fleshing out of an iconic thin narrative of Noah in the Bible and making it a story.

The story of Noah in the Bible is relatively sparse.  Noah never says anything.  God does all the talking.  In the movie, well, God may be doing some communicating, but since the narrative is told more from the ground, from Noah and his family’s perspective, Noah is the main character, making choices.

Making choices.  I think that’s an important thing to highlight.  One of the strange ironies of religious life, it seems, is that the closer we get to our God, whomever that may be, the seemingly fewer choices we get–until we are the Hand of God, the Feet of God, the Puppet of God.  I don’t think this is really the case.  But depiction in movies and books sometimes have us think characters who are devoted to their god cease to think and act based completely on the commands of God.  One should add “the interpretation of what they believe to be” between “on” and “the” in that last sentence. Because in many cases, believers have to do a lot of interpreting.

The movie holds out that question to answer.  Certainly Noah has to decide HOW he is hearing God.  He gets parts right—there is going to be a flood.  God wants him to build an ark.  The animals are going to come and get on board the boat.  After that, though, Noah is subject to some speculation and extrapolation when he can’t really hear a clear answer from God.

Aronofsky is not afraid to make God a real entity; he is not afraid to represent things in the Bible as they seem to be—the angels cast out of heaven, the unbelievably old people like Methusaleh–close to 1000 years old when the film begins.  These are fantasy elements, but Aronofsky plays them straight because believers believe them as fact.

(Full disclosure: As a Christian myself, I tend to believe most of the Bible stories as fact–since all the fantastical elements are explainable through communication and interaction with a god that I don’t fully understand or comprehend. Gods have powers.  They can do whatever they want and it happens…so angels from heaven, eternal people, giant massive floods–I’m okay with that.  It is my belief.)

Some Christians did not appreciate Noah.  At least that’s what I heard.  Over here the Gospel Coalition, Trevin Wax does a good run down of comparing Christians who loved the film with those who hated it–and why.

I loved the Christianity Today response especially–thoughtful and positive. Not what I expected, but very happy.

My point: Depicting someone’s sacred scripture is never easy.  When you are given such meagre bits of story that have been idealized, and in some sense, covered up, when the original sounds like a fable or a fairy tale to begin with, where characters are not that well-drawn, you invite interpretation and imagination.  Always a good thing. But a dangerous thing.  Where your imagination filled in Noah’s story with THIS, mine filled it in with THAT.  And as we’ve talked about here before, interpretation differences fuel arguments when it comes to scripture especially.

What does Noah do right, though, as a film of a sacred story?

1.  It treats the source material faithfully and respectfully.  Where Aronofsky had story to go with, he followed it very faithfully I thought.  Where things were open, or left un-specified, he went to other source materials of the culture to fill in blanks.  At times, yes, he used his imagination.  He does not shy away from Noah being drunk–but he certainly gives us a character reason for that drunkenness.  This movie, though, was not made to mock Jews or Christians with their own story. (And Noah is not owned by Christians or Jews–the flood story, of course, is ancient….and many cultures have a story very similar to this one)

2.   It brings up questions that sacred stories sometime leave unanswered.  Was the earth filled with such evil people that God had to destroy everyone else in a mass genocide?  We only get Noah’s perspective.  The movie has chosen its POV and can only speculate so far.  This is a human-centered story.  The movie wants to delve deeper with those questions though, not by beating you over the head with them, but by suggesting them, and letting you struggle with them.

4.  The magic of the faith, the miracles, are treated as real.  When you’re doing a sacred story and fleshing it out, or find yourself within someone’s sacred tradition, treat the magic and the miracles as possible–not hokey, not mythologized, but possible and real.  Prayer is communication with a deity–ask someone how they hear, how they interpret, how God speaks to them.  It’s possible that they receive dreams and visions like Noah, or an audible voice. Certainly, within the sacred story you’re working with, don’t try to dismiss the fantastical parts.  As fantasy writers, those should be our favorite parts.

5.  It made me feel as if I wanted to understand more about the “world” this story came from.  That in itself is a nice touch.  That, while all things didn’t look as I had imagined them, I was eager to follow this story, and understand the kind of world built from this faith.  The worldbuilding was done so well in the beginning of the film that I felt like Noah’s reactions and beliefs came from his worldview.

All in all, I loved this movie, for depicting faith honestly within a fantasy setting (with rock-encased angels wandering around and forests springing up out of nowhere, THIS is a fantasy setting).  I feel respected as a believer, and as a reader, I feel rewarded by watching someone take a story I thought I knew perfectly to new places.